Goldman gets bullish on NFLX!!

Remember all the doom and gloom on NFLX?  Look at the chart--It gapped iup after the last earnings and just marked time, as the shorts laid into it.

This morning the shorts are paying. Goldman now thinks NFLX has room to run!!

And notice CAT this am? I said that congestion at 92-93 was just the springboard to 98. Well you got it.

And do you know watch chart NFLX looks like? How about LVS? And when they report earnings in two weeks, you'll have a move on this number, just like NFLX did.

Free money all over the place!!!!

And then, to top it off Citi gets bullish and behind the secular NFLX story too! 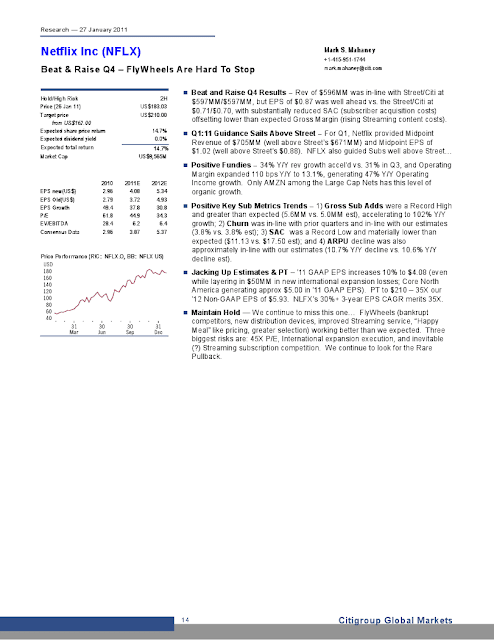 The only one missing from this story is Whitney Tilson? Remember him? He's the con artist that got all the shorts trapped in NFLX the last three months? Remember that?

And in case you want to read it--read it here! Of course, this was AFTER this number already moved 100 points in his face!!

And then, remember when he was down 100 points on his NFLX short? He then goes on Seeking Alpha and touts his re-short at 178 of his short that's underwater!

We've lost a lot of money betting against Netflix (NFLX), which is currently our largest bearish bet, in the form of both a short and put position. In this letter, we share our investment thesis in depth and describe why, at a stock price of $178.50 and a market cap of $9.3 billion (based on yesterday's close), we think it's an exceptional short idea. 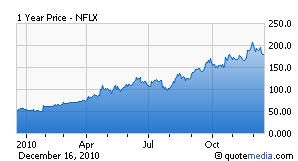 Given the natural inclination to talk about winners and quietly sweep losers under the rug, one might ask why we are writing about one of our worst investments. We have three main reasons for doing so: First, we think it's healthy to disclose and fully analyze our mistakes (although in this case we are not yet conceding that we've made a mistake in our analysis, but we obviously made a mistake in terms of timing our entry into the position). Second, it's a useful exercise for us - it helps clarify our own thinking - to put in writing our investment thesis, especially on complex and controversial positions .....
--------------------------------------------
Complex my ass! It's just plain stupid!

Meredith Whitney wanted to crack municipal bonds to make a name for herself--and she didn't give a rat's ass on the old folks who panicked and sold bonds on her advice.

Whitney Tilson, wanted NFLX to crack so he could get a name for himself. He hated the fact that the CEO defended himself and the company. Well screw you Whitney. Do you think that Wall Street has a carte blanche to run over companies, just because you get short the name?

Concerned? People are "concerned" about their children; analysts are "concerned" when 30% of the float is shorted, and the stock doesn't come in to the hedge funds who are short the stock. So we get a research fluff piece, with a sell recommendation that is picked up and disseminated by NY Times.

The Postal Service did an audit, and found that sometimes the adhesive flap causes the mail systems to jam, and thus the NetFlix mailer has to be sorted by hand. The Citigroup analyst said that 70% of all Netflix's envelopes did this. (He probably did "channel" checks at the post office.) The Postal service estimates this costs them over $21 million a year; and they would like .17 cent surcharge when the machines jam. (Netflix says they save the Post Office $100 million a year by picking up the returns instead of having them delivered by mail to them.) So the report said if Netflix "has to bear the full brunt of this increase (without other cost offsets), monthly operating income per paying subscriber would fall 67 percent from $1.05 to 35 cents."

And this is the "scary" headlines, with the sell recommendation that is pinged around the street, not the offsetting paragraph that says this: "Given the magnitude of this risk” Netflix is most likely to “work towards resolving this issue by redesigning its mailers." How about a stronger adhesive on the flap?

Which is how Wall Street works. There are always two sides of an issue, but Wall Street shows the cards they want, when they want the stock to move in the direction they favor.

And if you don't do, what they say to do, when the issue, which is not an issue, is made to be an issue, you'll be better off!
Posted by Palmoni at 9:42 AM

How are you playing LVS?