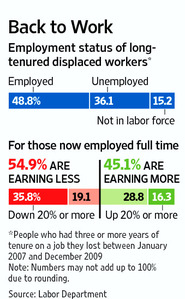 In Wisconsin, Dale Szabo, a former manufacturing manager with two master's degrees, has been searching years for a job comparable to the one he lost in 2003. He's now a school janitor.

They are among the lucky. There are 14.5 million people on the unemployment rolls, including 6.4 million who have been jobless for more than six months.

But the decline in their fortunes points to a signature outcome of the long downturn in the labor market. Even at times of high unemployment in the past, wages have been very slow to fall; economists describe them as "sticky." To an extent rarely seen in recessions since the Great Depression, wages for a swath of the labor force this time have taken a sharp and swift fall. 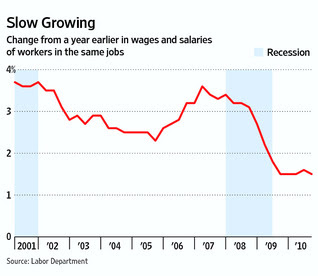