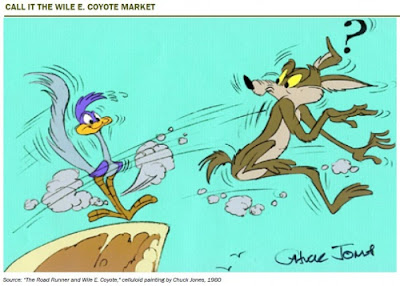 He brings out the same old tired bullsh*t but just dresses it up in drag! To wit--today he came out with this beauty:


While Bob Farrell’s rule number nine warns us to be wary of widespread consensus opinions, it may well turn out that all the bullish Wall Street analysts end up being correct that 2011 proves to be another wonderful year. But the one thing we can assure you, as was the case in 2010, is that it will not be a straight line up. In fact, we would argue that there are more headwinds, potholes, and event risks this year than there were last year. Enjoy the picture show.

The only problem is, Mr. Rosenberg trotted out Wile E Coyote on April 16, 2009! Which, of course, I chronicled! Read it and weep, Rosie!!!

But for those that don't want to click, because your ADHD won't allow you--here's what Rosie said back then--in his there you go again moment!!  He was as right as Jimmy Carter!!!

And back then, Rosie had this to say:

1. Whenever the S&P 500 slices to a new low, it’s time to cover shorts. Every new low in the past 18 months was met by a vigorous bounce, especially the last two.

2. Be wary of upward spasms where financials and consumer discretionary lead the way, because they typically go into these bear market rallies with the largest short positions. Also, be skeptical when the rally is led by low-quality stocks.

4. There seems to be confusion between an actual improvement in the economy and an improvement relative to the post-Lehman trend, when the economic indicators began to implode at annual rates of 30%-70%. Even Wily Coyote hits the ground at some point.

5. The profits recession is two-thirds of the way through; there is another one-third to go. Equity investors pay for profits, and with one-third of the downturn still ahead of us, it is difficult for us to be excited about any sustainable rally in the stock market.


And back then, I used this video to respond to snarky Mr. Rosenberg!

glad to have you back!

Bear markets do exist. There will be another one someday.

Why are you so sure it won't be anytime soon?

Aren't you worried about debt deflation? The whole world is broke you know, whether it's admitted or not.

So why should I be worried????

bear markets come and go but stocks are still cheap--so we plod upwards higher and longer until the bears that were bearish at 666, and who still are, finally become insolvent!