The shakedown of the bears 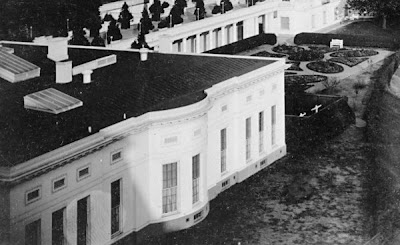 Last week, it was Gibbs of the White House shaking down Rick Santelli.

This week, it was Gibbs of the White House shaking down Jim Cramer.


Today, we heard that Bernanke wants to bring back the short selling ban, and President Obama said that stocks were good buys:

What you're now seeing is ... profit and earning ratios are starting to get to the point where buying stocks is a potentially good deal if you've got a long-term perspective on it.

To hear the words "good buy" in the stock market, when most investors have only said "good bye" to their money, means that too many people have gotten killed, and the system needs a respite.

After all, who was buying all the 2.5 puts in GE today? Someone trying to create even more fear?

But look what the losses are causing. How about the trillion dollar public pension liability?

Public pension funds across the U.S. are hiding the size of a crisis that’s been looming for years. Retirement plans play accounting games with numbers, giving the illusion that the funds are healthy. The paper alchemy gives governors and legislators the easy choice to contribute too little or nothing to the funds, year after year. 30 Percent Shortfall The misleading numbers posted by retirement fund administrators help mask this reality: Public pensions in the U.S. had total liabilities of $2.9 trillion as of Dec. 16, according to the Center for Retirement Research at Boston College. Their total assets are about 30 percent less than that, at $2 trillion. With stock market losses this year, public pensions in the U.S. are now underfunded by more than $1 trillion.
http://www.bloomberg.com/apps/news?pid=20601109&sid=alwTE0Z5.1EA&refer=home

How about the half a trillion unfunded pension liability in the S&P 1500?

Now we haven't even burned through or written down a trillion dollars in banking yet, but our pension liability exceeds this by another half a trillion and counting. Does anybody think this is going to just go away? Only if we can have 20%+ annual returns in the stock market for the next 5 years. Maybe these pension planners should get involved in the TALF!

But why would they do that? These people are the low hanging fruit that the investment banks need to offload their losses on!

Today we saw that JPMorgan's profit doesn't come from banking, but an $88 trillion derivative book. JPM is a bank on top of a hedge fund, just like AIG was an insurance company stacked upon a hedge fund. But Bernanke today said this about AIG “If there is a single episode in this entire 18 months that has made me more angry, I can’t think of one other than AIG” while he praises JPM, his adopted son. That's probably because AIG just hid their losses, while JPM hid Bernanke's!

AAA rated Harvard with their sophisticated money managers, are losing money because they made a derivative bet with JPM that supposedly was going to help them with their funding! It only boosted Harvard's funding cost in municipals by $400 million and $150 million over the term of the $500 million of notes they sold due in 2039. These "costs" will accrue to the other party of the derivative trade-Ben Bernanke's adopted son-JP Morgan.
http://www.bloomberg.com/apps/news?pid=20601109&sid=aouPA5ltirhk&refer=home

It looks like even Harvard was the low hanging fruit for these Investment banks!

But why should Bernanke get upset with these banks? Haven't we seen his accounting? After all, didn't he say that he didn't expect the taxpayer to lose even "one penny" with his investments? That despite the Fed's holdings of Bear Stearns assets in Maiden Lane being underwater by $3 billion on December 17, and well over $4.5 billion now. But the Fed's response to Maiden Lane's shortfall was this:

Despite the decline in the current fair value of the collateral, the Board does not anticipate the Maiden Lane loan will result in any net loss to the Federal Reserve or taxpayers. The Maiden Lane loan was extended with the expectation that the value of its portfolio would be realized either by holding the assets to maturity or by selling the assets over an extended period of time during which the full value of the assets could be realized.
http://www.federalreserve.gov/monetarypolicy/files/129periodicupdate.pdf

So there is a shakedown going on, because the bears are making too much money, and the losses in the stock market are significantly affecting and angering the public.

And now too much dirty laundry is hanging on the clothesline for everyone to see.

So it looks like the Fed's are trying to clothesline the bears!

And now 100 years later, the White House is airing their laundry in public again.

But this time, they are putting themselves on the cross!
Posted by Palmoni at 3:10 AM