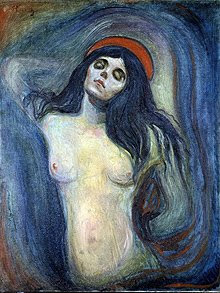 Why not? Weren't we told that tech won't lead this market?

Wouldn't it be most frustrating for the bears for these stocks to go up while their earnings are going down? And if tech stocks, with declining earnings will be going up, what will happen to those stocks that still have rising earnings?

They'll be re-appraised on the Wall Street auction!

Does anybody really think that the eBay franchise isn't worth more than the $12 that Wall Street gives it?

We have the bears telling the world that the storage companies are heading into the soup, because the average Joe is packing up his items, and bringing them home.

The public can't call up Sotheby's like Steven Cohen, and lend their stuff for an exhibit to drum up business, so they need to sell it online. Munch's Madonna and a plastic Virgin Mary statue on Grandma's dresser aren't exactly the same things!
http://www.telegraph.co.uk/culture/art/4988606/Hedge-fund-manager-Steve-Cohen-puts-320m-art-collection-on-show.html

So sell your stuff on eBay, but don't sell the stock.

Because the best part of eBay is that Meg Whitman, and her legacy is gone!
Posted by Palmoni at 7:40 AM

Inndian fashion iis gaining a lot of popularity abroad because of cheap labor and excellent craftsmanship.
Image Credit: Blakley Phottos 063 courtesy of Wikimedia.
Some of the most influential designers of Dior, and perhaps some of the mosdt influential
designers in fashion, include Ferre, Galliano and the brands latest creative
director, Simons.

The first level offers customers an open air dining experience,
full service bar, DJ booth, and large screen televisions.
You see, the thing about the fact that phrase is that it's which means
blatantly true and honest for every culture or society worldwide.
Express your rebellious selves and hip sense of fashion through us.