China is "worried" about Treasuries 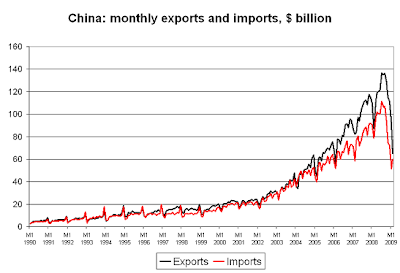 They should be worried about their own economy first!

Maybe that's why "China" is so worried!

The Chinese prime minister, Wen Jiabao, said the country was “worried” about its holdings of U.S. Treasuries and called on the United States to provide assurances that the investments were safe, and that China was watching United States economic developments very closely.

“We have lent a huge amount of money to the U.S. Of course we are concerned about the safety of our assets. To be honest, I am definitely a little worried.”
http://www.nytimes.com/2009/03/14/business/worldbusiness/14china.html?hp

If they are so worried, would they make statements like that???

Why doesn't China then go and sell some Treasuries, and take a piece of Sheldon Adelson's casino by financing the rest of his construction projects?

You got the buy recomendation on LVS (1.77) yesterday. Their debt was downgraded again by the imperial rating agencies, run by these kids with spreadsheets!

They might as well buy Sands, because people are ready to drink it!

People are so thirsty that in the absence of water they’ll drink the sand.

As we edge through these trying times, once trusted information sources are being challenged. This has spread throughout the societal spectrum—from financial advisers to mainstream media to politicians—with accountability being demanded as a function of frustration.
http://www.minyanville.com/articles//3/11/2009/index/a/21558

So now, we can trust the rating agencies?
These Johnny-come-lately that downgraded Buffett yesterday?
Like Meredith Whitney and Roubini, these bears over-reached. So did the rating agencies.
http://aaronandmoses.blogspot.com/2009/03/we-go-higher.html
And in the mindset of the hedge fund that is short, they though that a downgrade of Buffett would incite more fear in the market.
More fear? What is left for people to lose? The only people that have their money are the bears, and now Mr. Market has set his eyes on them!
The only thing that a downgrade of Buffett will show, is that "fear" has now found a new place to call home, and it's at the rating agencies, but now, they are afraid of the dark!
But they couch the darkness in Buffett's "demise." If he dies, who will direct Berkshire to be able to buy any more businesses?
Who needs to worry about that? You can buy any business now, at the cheapest price you'll ever see.
If Fitch was in Vegas, at least they'd be honest. They'd have an over/under on the age of his death! But the only bettors allowed would be those with an insurable interest!
Does anyone really think credit default swaps would pass the eye of the Nevada Gaming Commission?
Then who in their right mind would listen to the rating agencies now?
Their downgrade, made them look irrelevant. Why doesn't Fitch just downgrade US Government debt at the same time?
But those with positions running against them will try with their downgrades.
Heck, Goldman Sachs even downgraded Wal-Mart this morning!
Posted by Palmoni at 6:35 AM