A Well Cared for Hadrosaur? 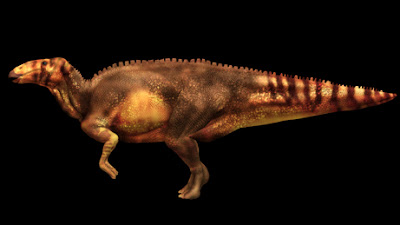 Sunday night, National Geographic is going to have a special on the Hadrosaur found in North Dakota, by teenager Tyler Dawson. It's the best preserved dinosaur ever, with beautiful markings, and amazingly detailed skin. It supposedly would look like this. The rapid and swift burial of this dinosaur allowed it's preservation.

Monday, I was in Tampa, FL doing my own "investigative work" on WellCare (WCG 41.72) a stock that has gotten hammered from 120 after the FBI raided the company and seized documents. So far, nothing has come of it, they've gotten some contract renewals and I didn't see any smoking gun in the public documents that I saw.

That evening, while eating at Frenchy's Saltwater Cafe in Clearwater, I picked up a Tampa Tribune, off the table next to me, and there was a half page article about the Hadrosaur, and underneath it, was a half page ad from Wellcare, advertising for the services they are supposedly being investigated for. Maybe it was serendipitous, or maybe I was just being stupid, but the thought crossed my mind that the 200 agents that raided the company that sparked the speculation of it's demise, may allow it's preservation.

Anybody notice that Humana is also being investigated for some of their Medicaid practices? I'm not saying these companies are altruistic in any manner, but sometimes there can be confusion between elderly patients and the provider, and it wouldn't surprise me, if a fine and a hired do-gooder makes this thing go away.

And maybe shareholders can get back some of the 80 points they lost.
Posted by Palmoni at 3:22 AM