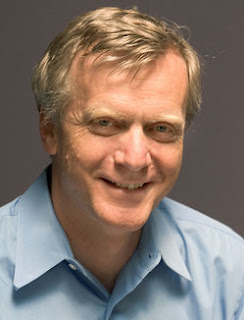 Here's the man who named "Googol" Google. Andy Betchtolsheim, was approached by Sergey and Larry, who told him about their magic search engine that they had named "Googol." Andy was in a hurry, and wrote a check to them for $100,000 and made it out to "Google, Inc." He bought into the company, and he didn't even need to see a business plan. Nine months later a VC gave them $25 million.

So think about it for a second. Larry and Serge, with a check for 100K, being college kids, and not having company documents--are you going to ask the guy that gave you the check (especially in a hurry “what if he changes his mind??) to cut you another one? No it will sit in the desk drawer for the next couple of weeks til you get the paperwork done, for your new company called “Google.” Now since Google is so successful, it is better to portray it as just a misspelling--- in a hurry--- of brilliant geniuses forming a company-but here's the story behind the name.

Now how was Googol named? A mathematician, Professor Edward Kasner of Columbia University asked his 9 year old nephew, Milton Sirota, what would be a name of a number with 100 zeros. The 9 year old said googol--and the name stuck--the name stuck for the number that is larger than all the “known” space in the universe, even broken down to the smallest particle known, named by a 9 year old kid.

Hey, Thanks for you post! It helped me alot with my school work. Just on thing: You misspelled the name, its Andy Bechtolsheim

My typing isn't always the greatest!