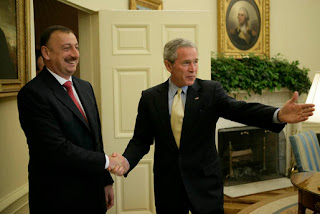 I saw George Mitchell pontificating today, and I just wanted to remind people that he lives in a glass house also, but not in the Trump Tower. That's where Andrew Lloyd Webber is dumping his condo on the 59th and 60th floors for $22.5 million, of which he paid $5.5 million for it in 1987. Dolly Lenz ("Jaws" as ex Tyco CEO Dennis Kozlowski called her) had the listing and it was showcased on CNBC last week. Here it is.
http://www.elliman.com/Listings.aspx?ListingID=922401&rentalperiod=&SearchType=Broker_Current&Region=NYC&BID=IDL
What's this have to do with George Mitchell? Go back to the late 90's, when Andrew Webber sold his Eaton Square Mansion for $9.7 million, to Viktor Kozeny, who "tried" to make a run at SOCAR, the State Oil Company of the Azerbaijani Republic. Citizens of Azerbaijan (7.5 MM)would get four vouchers that they could redeem at auction when the various state run businesses were put up for sale. Kozeny told investors he was buying up the vouchers on the streets of Azerbaijan, and he would use them to take control of SOCAR, because he had gotten assurances from President Aliyev that he had the inside track to acquire the company when it went from the state to private hands.
One of his investors, was George Mitchell, who also headed up the Washington lobbying for Kozeny. When Kozeny opened his investment house Minaret in April of 1998, George Mitchell was his guest of honor. Unfortunately no politicians from Azerbaijan showed, and the former majority leader of the United States Senate, couldn't figure out that anything was amiss. In actuality, Kozeny bought up the vouchers, and then sold these "options" that he acquired at .40 cents to investors for $25, profiting to the tune of $73 million, and the investors in Kozeny's deal lost $200 million.
Where did the money go? Some say it was in bribes, and thus, it was better for everything to be swept under the table, and to just count your losses and go home.
In today's climate George S. Mitchell, probably would have been prosecuted. So if your wondering why he thought it was best to leave the ballplayers alone, he probably remembered that baseballs can break glass.
(The pic is of President Aliyev with President Bush, last year.)
Posted by Palmoni at 12:37 AM

"In actuality, Kozeny bought up the vouchers, and then sold these "options" that he acquired at .40 cents to investors for $25, profiting to the tune of $73 million, and the investors in Kozeny's deal lost $200 million."

I love it when people post allegations as if they were facts. This statement is an allegation by the investors in a pending court case - not a proven fact. In fact, Kozeny lost all his money he invested in Azerbaijan as well.

The FBI agent who headed the investigation said: "It appears the corrupt Azeri officials scammed the scammers. They pocketed the bribe money without ever delivering the quid pro quo"

And I love it when people post allegations as if they were facts..as if Kozenzy lost all his money...the only thing missing is the word "investors" between "his" and 'money"