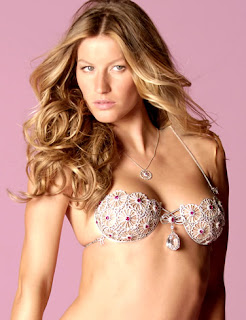 I keep bringing them up, because they are playing in our market, and they are absolutely wrecking the "pros." It is almost comical. They don't want our dollars, so every other currency goes up against it. They don't want our financials, so they buy the 100 largest non-financial companies: the NASDAQ 100. Gold and silver have had solid moves, but the next move in silver will be parabolic as the paper futures get delivered.

Every day we here new dire reports about US financial companies, and this works for a bit to panic US investors. Then the stocks are picked up in giant programs that move the entire market, all to the bears chagrin. The tech stocks romp, while the solar stocks ramp, and our dollar falls. But Wall Street tells us the dollar will soon rally because Gisele Bundchen wants to get paid in euros and not dollars; and what does a supermodel know?

Give me a break. That's analysis? Now take a good look at Gisele. She dates Tom Brady of the Patriots and pulls down $33 million a year. We're supposed to believe that she's the indicator that will cause our dollar to rally? That's Wall Street research? Believe it at your own peril!

Let me give you a sports analogy. Today we heard from Nutri-system spokesman, coach Don Shula, the elder statesman of football, a wonderful community leader and gentlemen, who had some great years with the Dolphins. He had this to say about the Patriots when he defended his 17-0 season:

"The Spygate thing has diminished what they've accomplished. You would hate to have that attached to your accomplishments. They've got it. Belichick was fined $500,000, the team was fined $250,00 and they lost a first-round draft choice. That tells you the seriousness or significance of what they found."

"I guess you got the same thing as putting an asterisk by Barry Bonds' home run record. I guess it will be noted that the Patriots were fined and a No.1 draft choice was taken away during that year of accomplishment. The sad thing is Tom Brady looks so good, it doesn't look like he needs any help."

Sorry, but I'll take the coach with the hoodie, and the quarterback with the supermodel girlfriend. Unless he's playing Brett and the Pack.

And I'll bet with the sovereign buyers, and not the hysterical criers of gloom on the street.

And for those that want Gisele's video version: