Cerberus styx it to United Rentals 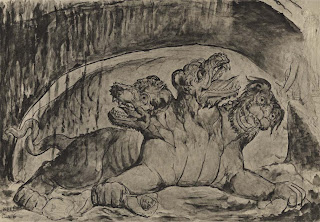 Cerberus offered to pay United Rentals $100 million for walking away from the buyout or they could just renegotiate the $4 billion deal. This time, the sop was paid by Cerberus!

When Charon ferried the souls over the river styx to hades he took the gold coin out of the dead person's mouth, and threw a honey cake to Cerberus, the three-headed watchdog of hell who prevented the departed souls from leaving. Thus the expression "a sop to Cerberus" which meant "an insignificant sum to prevent displeasure."

But the question remains, "What is the sop to ResCap the housing arm of GMAC owned by Cerberus?" Here's what it costs in credit default swap land. $37 million per $100 million of bonds and $500,000 a year. So the market's pricing the bonds at 60 cents on the dollar, or an imminent holiday bankruptcy.

Maybe that's the sop the Fed needs to be more aggressive in their rate cuts.
Posted by Palmoni at 12:11 AM