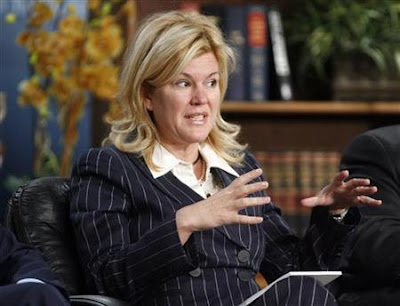 May 20 (Bloomberg) -- It’s no wonder Meredith Whitney wants to distance herself from her prediction of the municipal market’s meltdown.

“I never said that there would be hundreds of billions of defaults. It was never a precise estimate over a specific period of time.” So said Whitney on Bloomberg Radio on Wednesday morning.

As for timing, “It’ll be something to worry about within the next 12 months.”

What this sounds like is Meredith Whitney saying there will be hundreds of billions of dollars’ worth of municipal bond defaults within the next 12 months. That sounds like a precise estimate over a specific period of time. And that’s how it has been reported and dissected in the press since then, with not a word of protest from Whitney.

Until this week. Whitney told Bloomberg Radio host Tom Keene that she thought “60 Minutes” did a “really good job” on the story. “But the risk is that they take bits and pieces of an hour-and-a-half interview and certain portions are more magnified than others.”

Whitney also later told Keene: “In the cycle of this municipal downturn, I stand by it. But we never had a specific estimate for that. That’s not the nature of our research.”
-----------------------
So Wall Street's femme fatale new fatal flaw is shrilly lying about her record-----to go with her flawed research!
Posted by Palmoni at 8:23 AM