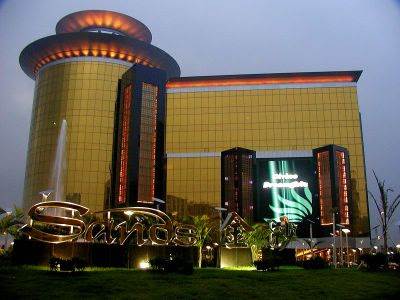 The highlight of the quarter % wise was the EBITDA at Seasons which went from $12 million to $57 million. However, Seasons had a strong start---because Sheldon had this to say last earnings report regarding Seasons miss:

"We're not sure of the seasonality of that. What I'd like to point out to you and to the rest of the listeners as Mike said that the hold on the Rolling Chip volume, which is the majority of the activity at the Four Seasons Plaza Casino was only 1.55% and the adjusted property EBITDA for the quarter was 12.2%; whereby in 2009, it was 20.4%. I could tell you that it is a volatile result there. But I could say that we have exceeded that full quarter '09 $20 million just in January alone in 2011. We've exceeded that $20 million at the Four Seasons.

And yet Sands still missed numbers, as EBITDA dropped sequentially at all properties save for Seasons.

The stock should trade lower on the earnings miss--and it needs to go lower and digest the news.
Posted by Palmoni at 7:46 PM