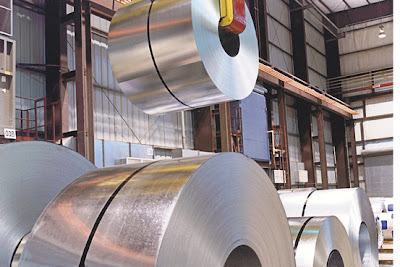 Barrons
Bulls are excited by the seeming disconnect between steel prices and U.S. Steel stock, calling it an opportunity to buy one of the better-positioned global steel makers.

The divergence has occurred because "investors are more concerned about the current direction of steel prices than the absolute level," says Michael Gambardella, steel analyst at JPMorgan. Domestic hot-rolled prices stood at $600 per ton around Thanksgiving, hit $900 in April and now are about $830. So, while prices are up nicely from the start of 2011, they're down from the early April high, and investors fear further declines, thanks to potential weakening in global demand

At first glance, U.S. Steel shares don't look cheap, trading for 18 times projected 2011 profits of $2.53. But they're more reasonable based on estimated 2012 profits of $5.45, which could prove conservative. Assuming steady steel prices, U.S. Steel could earn $7 to $8 a share next year. Gambardella carries a price target of 76, about 65% over recent levels, and an Overweight rating on the stock.

"The market is pricing in an overly bearish view of steel prices," says Evan Kurtz, a Morgan Stanley analyst. "We think the fall in steel prices will be more mild and short-lived than the market expects." He also carries an Overweight rating on U.S. Steel with a 70 target, while projecting 2012 profit of $8.60 a share. An improving U.S. economy has supported steel prices this year.


Check out my web blog ... wim hof klimmen in stilte