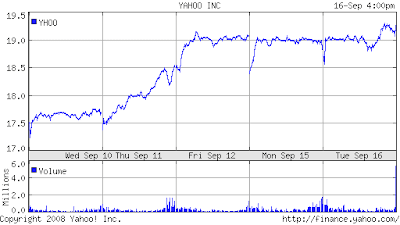 Now that SNDK has finally gotten a bid, I can get back to Yahoo!
Sandisk (SNDK 14.57) traded 24 million shares today, after 48 million shares yesterday. The Sept 15 calls closed at $1.15. It's a cheap way to play the recovery in flash.And with the amount of cash on SNDK's balance sheet, it's also a cheap enough stock that someone could start a buyout rumour.
http://aaronandmoses.blogspot.com/2008/07/sandisk-play.html
Sometimes these takeovers takke longer than you think. Samsung was talking to Sandisk for the past few months, but no deal was reached. So today we got a bear hug.
http://biz.yahoo.com/bw/080916/20080916006764.html?.v=1
Now when Sandisk popped a month ago, on takeover rumors, Cowen & Co dismissed it. I begged to differ:

Cowen & Co re-iterated their underperform on SanDisk today and said a takeover would be unlikely with Seagate. I said before, that SanDisk looks better than it appears, especially if you like to sleuth. I'll let that statement speak for itself.
http://aaronandmoses.blogspot.com/2008/08/sandisk-pops-as-advertised.html

On September 5, with Yahoo at $17.75, I said there might be a second act for Yahoo with Microsoft.

YHOO (17.75) is now down to a five year low, and T Boone Pickens and Paulson have already taken their lumps on 60 million shares bought at 27-28.MSFT walked away from their $33 bid as Yang and Co. and Legg Mason's Miller thought they had a better plan than to take Bill Gate's money.I'd take this number now for it's enterprise value, right here. And if you want to speculate, the October 20's calls can be had for .70. The price of admission in this number is low!
http://aaronandmoses.blogspot.com/2008/09/second-act-for-yahoo.html

Did anyone notice how Yahoo held up the last few days when the market was getting shellacked? Does anyone think that Carl isn't still stirring the pot?

I said before that the price of admission on this number (Yahoo) is low.

Once again, I'll let that statement speak for itself.
Posted by Palmoni at 9:17 PM