The FT on Goldman Sachs 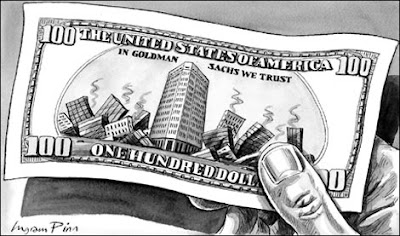 A must read-Treasury and Bernanke finally panicked when Goldman was on the ropes.
"A lot of people used to think that Goldman Sachs ran the US economy. Now we know it does.

On Tuesday morning, Hank Paulson, the US Treasury secretary and former chairman and chief executive of Goldman, testified to Congress about his plan to buy $700bn of mortgage securities. He wants to scoop up these assets as rapidly, and with as little interference, as possible in a manner yet to be fixed.

On Tuesday evening, Goldman declared that Warren Buffett, the legendary investor, was handing it $5bn of new capital in the form of preference shares and the bank would follow up with a $5bn equity sale. For investment banking rivals that have fallen by the wayside, or had to hunt overseas for funds, it showed who is top of the heap.

Mr Paulson’s stewardship of the crisis-hit economy – despite the role that investment banks have played in bringing it down – and Goldman’s bravura capital-raising are typical. Goldman partners are not only smarter than the average Wall Street bear, but often turn up in “public service”, running finance ministries and central banks.

They have been very adept at first making money for themselves and then trading the financier’s life for that of the power broker. Even in a Wall Street-induced crisis, it feels safer to have Mr Paulson at the US Treasury than Paul O’Neill, or John Snow, his Main Street predecessors. His bald pate and manner are scary but he is no ingenue.

This Wall Street crash, however, has made the latent conflict of interest between Goldman’s public and private faces uncomfortably real. Mr Paulson insists that, in his current job, he cares only about “the American taxpayer”, yet Goldman has been one of the prime beneficiaries of recent interventions by the Treasury and the Federal Reserve. Even if you accept, as I do, that Mr Paulson is a man of principle who tries his best to put his country first, this is troubling.

It places him in a more awkward spot than Robert Rubin or Steve Friedman, who ran Goldman and went on to become Treasury secretary and director of the White House Economic Council respectively; or Jon Corzine, the former Goldman head who is New Jersey governor, or Mario Draghi, a former Goldman partner who runs the Bank of Italy.

It might not be so awkward if Goldman had suffered just a little more from the credit crisis. But it has instead emerged, along with Morgan Stanley, in the last pair of large investment banks standing. The Securities and Exchange Commission has protected them and other institutions from short-selling and the Fed has allowed them to become fully fledged banks.

Wall Street is widely reviled at the moment, but even Wall Street is bitter about Goldman. Former employees of Lehman Brothers, which was left to fail by the Fed, complain that Mr Paulson and Ben Bernanke, the chairman of the Fed, saved their $700bn (€474bn, £377bn) shot until last week. They pulled out the big gun when it looked as though Goldman and Morgan Stanley were in trouble.

Now, to compound matters, Goldman could make a bundle if Mr Paulson’s $700bn fund clears Congress. Unlike rivals such as Lehman and Bear Stearns, Goldman marked down its exposures to subprime mortgages and real estate so aggressively that it has only $28bn of illiquid assets, of which a mere $1.7bn related to subprime mortgages, on a $1,000bn balance sheet.

It would be a bit rich for Goldman to turn round and make a profit by selling this stuff at a higher price to its old boss. But it need not be quite so blatant: even if Mr Paulson’s fund buys comparable assets, Goldman will be able to mark up its own book. Furthermore, it is already thinking of using Mr Buffett’s largesse to buy more distressed securities.

Goldman can hardly be blamed, of course, for navigating the Wall Street crisis better than others. It did not expose itself so disastrously to one highly leveraged play on the US mortgage market. It hedged against the credit turmoil and cut its losses swiftly rather than crossing its fingers that the market would turn.

Yet Goldman got a helping hand from the authorities and stands to get another one while Lehman was – rightly, in my view – allowed to fail and Bear Stearns’ shareholders were nearly wiped out. Would the Treasury and the Fed ever have allowed Goldman to follow and its partners to lose their wealth? I doubt it.

The fact is that Goldman, having started out as a humble commercial paper house in 1869, has worked its way to the heart of the financial and political establishment. It has become the modern-day General Motors by convincing politicians and regulators that what is good for Goldman Sachs is good for the US economy.

It does not hurt that so many Goldman executives become public officials. They no doubt go to the capital with the best of intentions, but they bring with them Goldman’s view of the world. Bear Stearns was “too inter-connected” with markets to be allowed to fail, but Goldman has embedded itself far more deeply in Wall Street and Washington.

Most of the time, this intermingling is not pernicious. Goldman partners tend to be clever, hard-working people. I also share Goldman’s views on the benefit of free markets and globalisation, and the belief that wealthy institutions and individuals should use their clout and money both for philanthropy and to improve standards of government.