Physical gold is leaving the stockpiles 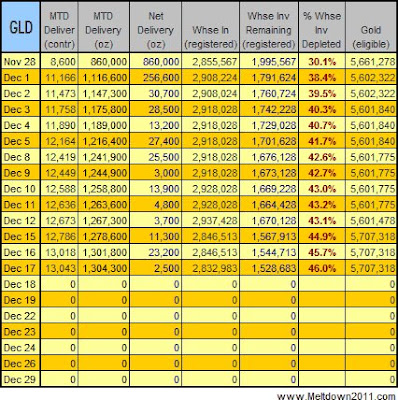 Gold in Switzerland is disappearing, and if you click on the picture above, you will see that gold for delivery at COMEX is leaving storage also. People want the physical gold, not a piece of paper from an institution that can go bankrupt.

Didn't Secretary Paulson say today that there wouldn't be any more major bank failures? How's his forecasting record?
The picture above explains the story here in the US, and the story below explains what is happening in Switzerland.
Though Switzerland is not a gold miner, it is home to some of the world's largest refineries, which process an estimated 40 percent of all newly mined gold.

Argor-Heraeus is part-owned by the Austrian Mint and a subsidiary of Germany's Commerzbank. Commercial and central banks are its chief customers and it says it processes some 350-400 tonnes of gold and 350 tonnes of silver per year.

Customers buying gold bars, which can weigh more than 10 kg each, have to wait roughly a month, taking into account the year-end holiday season.

For those buying coins or ingots, which can fit into the palm of a hand, the delay is six to eight weeks. A year ago, these small products could be had within a couple of days.

"Many (people) are afraid of leaving their money in banks," said Sandra Conway, managing director at ATS Bullion in London, which sells bullion and gold coins to institutions and the retail market.

"It's difficult to quantify, but I would say our turnover over the last three months has certainly doubled compared to the previous three months," she said.
http://www.mineweb.co.za/mineweb/view/mineweb/en/page34?oid=75294&sn=Detail
Posted by Palmoni at 9:57 PM