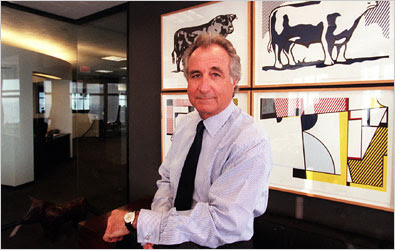 One of them was Walter M. Noel Jr., who struck up a business relationship with Mr. Madoff 20 years ago that helped earn his investment firm, the Fairfield Greenwich Group, millions of dollars in fees. Indeed, over time, one of Fairfield’s strongest selling points for its largest fund was its access to Mr. Madoff.

But now, Mr. Noel and Fairfield are the biggest known losers in the scandal, facing potential losses of $7.5 billion, more than half the firm’s assets.

Jeffrey Tucker, a Fairfield co-founder and former federal regulator, said in a statement posted on the firm’s Web site: “We have worked with Madoff for nearly 20 years, investing alongside our clients. We had no indication that we and many other firms and private investors were the victims of such a highly sophisticated, massive fraudulent scheme.”
http://www.nytimes.com/2008/12/15/business/15madoff.html?pagewanted=2&ref=business

Not a Merry Christmas for Fairfield's Mr. Noel.
Posted by Palmoni at 7:36 AM