The latest screed from Bill Gross 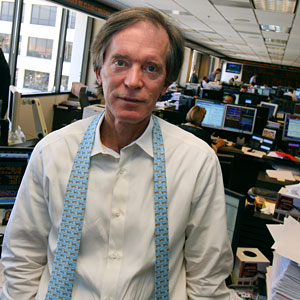 •The New Normal has a new set of rules. What once pumped asset prices and favored the production of paper, as opposed to things, is now in retrograde.

•The hard cold reality from Stan Druckenmiller’s “old normal” is that prosperity and overconsumption was driven by asset inflation that in turn was leverage and interest rate correlated.

•Investors are faced with 2.5% yielding bonds and stocks staring straight into new normal real growth rates of 2% or less. There is no 8% there for pension funds. There are no stocks for the long run at 12% returns.

So the hedgies are in retreat and, in some cases, on the run. Ken Griffin at Citadel is considering cutting fees, and Stan Druckenmiller at Duquesne/ex-Soros is packing his bags for the golf course. Frustrated at his inability to replicate the accustomed 30% annualized returns that his business model and expertise produced over the past several decades, Stan is throwing in the towel. Who’s to blame him? I don’t. I respect him, not only for his financial wizardry, but his philanthropy which includes not only writing big checks, but spending lots of time with personal causes such as the Harlem Children’s Zone. And at 57, he’s certainly learned how to smell more roses, pick more daisies, and replace more divots than yours truly has at the advancing age of 66. So way to go Stan. Enjoy.

But his departure and Mr. Griffin’s price-cutting are more than personal anecdotes. They are reflective of a broader trend in the capital markets, one which saw the availability of cheap financing drive asset prices to unsustainable heights during the dotcom and housing bubble of the past decade, and then suffered the slings and arrows of a liquidity crisis in 2008 to date. Similarly, liquidity at a discount drove lots of other successful business models over the past 25 years: housing, commercial real estate, investment banking, goodness – dare I say, investment management – but for them, its destination is more likely to be a semi-permanent rest stop than a freeway. The New Normal has a new set of rules. What once pumped asset prices and favored the production of paper, as opposed to things, is now in retrograde. Leverage and deregulation are fading from the horizon and their polar opposites are in the ascendant. Some characterize it in biblical terms – seven fat years to be followed by seven years of lean. Others like Michael Moore and Oliver Stone describe it in terms of social justice – greed no longer is good. And the hedgies – well, they just take their ball and go home. What, after all, is the use of competing if you can’t play by the old rules?
Posted by Palmoni at 6:40 PM