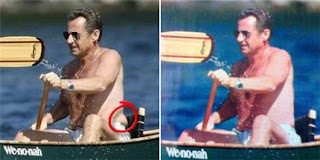 Last month when Republican presidential candidate Giuliani was gushing about the book "Testament" that French president Sarkozy wrote, the media said he had a "man crush" on him. A couple weeks later Sarkozy is pictured canoing in Paris Match magazine. Nothing like a little photoshop to get rid of some "lovehandles." The point is, political figures, who pretend they are impervious to pressure, care about their image. So does the Fed. Now that we have a decent 3 handle on the two year it's time to leave the Fed alone until their meeting next week.

Tomorrow, is the six year anniversary of 9/11. What happened to our leaders? Maybe after some reflection, they'll start to reassert themselves and tackle the more weightier issues in the world.
Posted by Palmoni at 3:19 PM