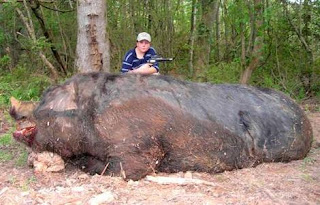 No not Hogzilla, who was actually a pet pig, peppered by an 11 year old, but Harley Davidson. They warned that sales in August were in the tank. I wonder if Harley is considered in the "real" economy by our August fed officials? The stock looks to gap down around 49, and historically, the stock has been a buy about six weeks after these gaps when the real long term investors add or build a position.
Posted by Palmoni at 7:46 AM