Remember the hand wringing on FCX?

Here's the chart--when we were told the action in FCX meant the move in gold was over.

We had a big reversal day, and the stock backed up 10 points--it then retested that and --Oh My!--it failed.

So because of those squiggles on the chart, mining would stop around the world, and China wouldn't buy any more gold, and then, it would remain just some "barbarous relic!"

Heck--just ask Brian Belski!! Remember that?? With his pretended Wall Street manner of trying to "protect" your money by keeping you out of gold.

Now we found out that President Obama just made a secret trip to Afghanistan. Heck--I hear he was there to pick up some gold on behalf of the US Government, so Fort Knox would really have some!! 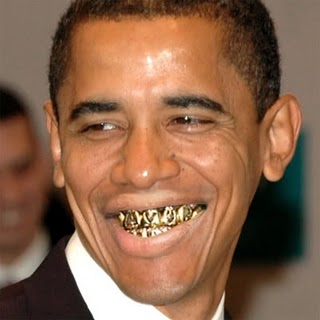 Now today we had a very sloppy Unemployment Report--and once again we had troves of workers leaving the workplace. Which just means that the job situation is worse than it seems.

Which just means that tax cuts will be passed.

Which just means that unemployment benefits will get extended again.

Which just means that you have to keep buying the dips, as the POMO team keeps the market elevated.

Which just means that the Pavlovian instincts of dip-buying will soon become much more prevalent and stronger by the dip buying crowd as that behavior gets rewarded even more!

So yesterday, after parlaying my $20 slot play into $2,000, I decided to go over to the Hilton and play craps and see if I could get a run on the found money.

But there wasn't a whole lot of people at the tables, so I figured I would just go to the Borgata tomorrow instead--because I like it when there's a lot of action. 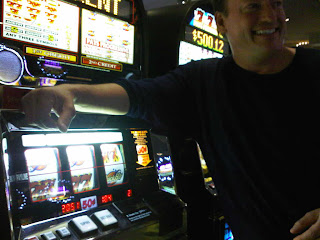 So instead, I walked by and put $100 in this slot----and on the 8th pull it hit the Jackpot. Two slot jackpots in a day--and I didn't even have to spend $20 to get them. I had someone take a picture just because the Casino says you can't have a picture inside. They act like it's a state secret. 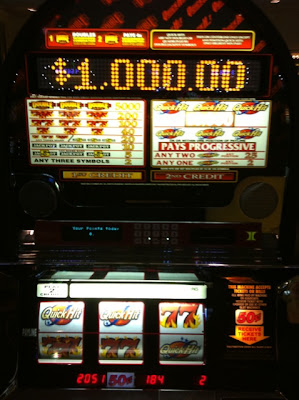 (And for you bears that can't read the tape or for that matter--a slot!--here's where it reset--for the anonymous commenter below--three quick hits on either side of payline pays progressive)

Now--people will say that's not supposed to happen. But that's just like Wall Street. This market is so "rigged" to the upside, that the Fed, who acts like their books are a state secret--(unless of course, you're a foreign bank that borrows billions and billions or one of the favored banksta buddies, who want to borrow billions and billions more) is now allowing pictures at the Wall Street casino.

And they're telling the public that the game is rigged to the upside.

But the public ain't buying it, because they're unemployed and broke!

But that doesn't matter.

So why would it matter now??

Especially since the Fed wants to turn the public into stock sluts in the rigged casino!
Posted by Palmoni at 11:53 AM

That machine does NOT look like it has 3 across of anything = loser.

Ya know, if you're going to BS us bears, at least try to make it look legit.
Kinda like wall street, don't trust your eyes about the state of the country, just trust the stock pump game.

Won again, did you. Sure.

I thought bears were in hibernation this time of year... I'll bet you got mad when you lost at monopoly as a kid too....

Look at the top right of the screen where it says pays progressive --you need just 3 quick hits--If the three quick hits were on the line it would of paid $10,000 but whatever it still paid a progressive

maybe u need to click on the picture to see--and if you do you'll notice it's titled jackpot again--just in case you feeble bears would be skeptical!!

It wasn't the amount --it was just that two jackpots hit on less than $20 bucks--which is supposedly long odds.

But that's you bears--You can't ever get anything right, you always think someone is f*ckin with you, and you can't stand anyone beating the odds

But yesterday I just picked a couple slots like I picked stocks!

$20 bucks two jackpots--deal with it!

You were always the family's Gladstone duck!

What do Bears, the Progressive Left and Climate Alarmist all hate?

They do allow for some fascinating behavioral studies though - mostly through a complete inability to laugh at themselves. Probably comes from having to carry the weight of the world...