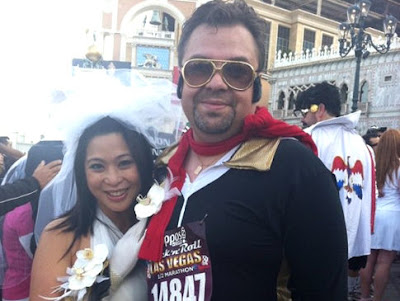 NY Daily News
An Elvis impersonator saved a woman's life after she collapsed at a Las Vegas restaurant Sunday -- the same day that he married his fiancée and completed a marathon.

Claudio Palma, a doctor from San Francisco, was dressed in The King's trademark get-up for the annual Rock 'n Roll marathon when he saw a woman collapse at a local burger joint, the Las Vegas Review-Journal reported.

The unidentified woman, a diabetic, was bleeding from the mouth and head and had no pulse.

Palma, an anesthesiologist, was still in his running shoes and sprinted over to the women to perform CPR. He revived the woman before paramedics arrived and took her to the hospital.

He said that the woman "freaked out" when she came to and saw the paunchy, sideburned King kissing her on the mouth.

"She was giving me a weird look and telling me she was okay," Palma told the paper.

Earlier in the day, Palma married his fiancée, Rhanee, in a run-thru chapel during the second mile of the race.
Posted by Palmoni at 2:24 PM

WOW, the standards to be a physician sure have declined.

And I doubt very much that the cpr did anything. Diabetics can lapse into a momentary coma but still be alright. My uncle used to have episodes like that.

I love it. I guess you don't have to "Look" the part to be a great person/ physician.

I'd take this guy any day if I didn't have a pulse and blood running out of my mouth. Give me a break. A lot of those clowns save lives every single day. ANON you'll have a different story when you're the one he saves.

I think this guy needs to run over to Las Vegas Sands and give them some CPR !!! I think it's DOA....

I don't know one intelligent, dignified and professional physician who would go to vegas to get married.

Maybe its just me but I like to see a stable, normal person when I visit a Dr.
People who go to vegas to marry are, by far, just a group of lowlifes choosing the lowlife capital of the nation to perform what should be a very important ceremony in ones life.

"very important ceremony in ones life" LOL Yeah 55% of ex married couples agree with you.
Chill bro remember he saved a life.

And of the 7 or 8 physicians I know, all but one were some of the hardest partiers I went to school with. Unbelievably hard.

They just party upscale these days, just like this guy.

http://www.ecostocks.com scam people from their money. I would stay away from these guys if you invest in penny stock at all

This Minnesota Vikings Double Sided House Flag measures 28x40 inches and provides a 2.5 inch top sleeve for insertion of a flagpole or banner pole. Our Minnesota Vikings Double Sided House Flag hangs vertically, is made of 100% thick polyester, features permanent Screen Printed NFL team logos, and is Viewable and Readable Correctly on Both Sides with each side having a different design (Helmet Logo and Team Logo).