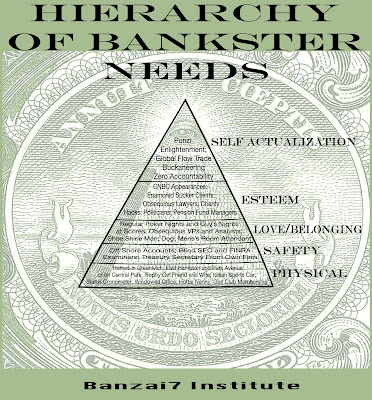 Why wouldn't JP Morgan be sued. Ponzi is the highest level of self-actualization for a banker!!

The lawsuit is the latest salvo by Irving Picard, who has filed a flurry of cases in recent days seeking to claw back improper profits from the fraud. Mr. Picard has a deadline of Dec. 11 to bring the lawsuits to recover assets for victims, the two-year anniversary of Mr. Madoff's arrest and the day his firm filed for bankruptcy protection.

"J.P. Morgan was willfully blind to the fraud, even after learning about numerous red flags surrounding Madoff," said David J. Sheehan, a lawyer for Mr. Picard, in a statement. "While many financial institutions enabled Madoff's fraud, [J.P. Morgan Chase] was at the very center of that fraud, and thoroughly complicit in it."

JPM, of course, says they are innocent. Really.

Maybe it's time to reread this!

In 2006 JP Morgan allowed bank investors to leverage their bets on Madoff, and then put $250 million of the firms money alongside those investors to invest with them. JP Morgan, then yanked their money a few months before Madoff collapsed, without telling any of those investors!

They used the Goldman Sachs "model" that was used during the subprime debacle. Goldman got short sub-prime, while still selling the product to it's clients.

JPMorgan Chase says that its potential losses related to Bernard L. Madoff, the man accused of engineering an immense global Ponzi scheme, are “pretty close to zero.” But what some angry European investors want to know is when the bank cut its exposure to Mr. Madoff — and why.

How is it possible that JP Morgan can say their losses are pretty close to zero? If JP Morgan withdrew money just months before an entity imploded, JP Morgan has to give that money back. That is known as "fraudulent conveyance." So now we know how JP Morgan calculates losses that the bank will eventually have to eat. $250 million of losses on the bank's book, is "close to zero." So what does that mean for the hundreds of billions of prime jumbo mortgages that are their books where JP Morgan is acknowledging those losses?

As early as 2006, the bank had started offering investors a way to leverage their bets on the future performance of two hedge funds that invested with Mr. Madoff. To protect itself from the resulting risk, the bank put $250 million of its own money into those funds.

But the bank suddenly began pulling its millions out of those funds in early autumn, months before Mr. Madoff was arrested, according to accounts from Europe and New York that were subsequently confirmed by the bank. The bank did not notify investors of its move, and several of them are furious that it protected itself but left them holding notes that the bank itself now says are probably worthless.

A spokeswoman, Kristin Lemkau, said the bank withdrew from the Madoff-linked funds last fall after “a wide-ranging review of our hedge fund exposure.” Ms. Lemkau acknowledged, however, that the bank also “became concerned about the lack of transparency to some questions we posed as part of our review.”

Investors were not alerted to the move because, under sales agreements, the issues did not meet the threshold necessary to permit the bank to restructure the notes, she said. Under those circumstances, she added, “we did not have the right to disclose our concerns.
You take your money out, and you don't tell investors? That's like leaving your kids in a house burning down, while you run out the back door!

That doesn’t satisfy some investors. As they see it, they were the first people who should have been alerted to the bank’s concerns. “Instead, we continued to pay our fees to the bank and remained the only ones exposed to the risks that JPMorgan did not want to assume,” said the chief asset manager of an Italian investment firm, who declined to be identified because of potential litigation.

JP Morgan didn't tell, because they wanted the FEES!

The tale began several years ago when a unit of JPMorgan Chase in London issued a series of complex derivatives that gave investors a way to triple their bets on the Fairfield funds, whose solid consistency mirrored the track record that had quietly — and ruinously — drawn investors to Mr. Madoff for decades...

Some investors now note that Mr. Madoff maintained several accounts with JPMorgan Chase, and wonder if the parent bank saw trouble brewing in those accounts and got its London affiliate out of Fairfield before the storm hit.
http://www.nytimes.com/2009/01/29/business/29madoff.html?ref=business

Isn't that rich? JP Morgan develops notes from it's derivative division that allows investors to triple their bets on Madoff, then later, JP Morgan gets squeamish, and yanks their money, but they don't tell any of the investors that they are no longer investing with them.

Why? What prevented this patron bank of virtue from not telling their clients that Madoff was a fraud. Why would JP Morgan leave their clients holding the bag?

And was JP Morgan nervous about Madoff? They had access to other Madoff accounts.

And how did JP Morgan prevent others from selling?

They discounted the "quoted" prices of the notes by 12%, so those investors would stay in with Madoff and lose their money!

And that, my friends, is how Jamie Dimon does business.

After all, he's the face of the nation's bank! 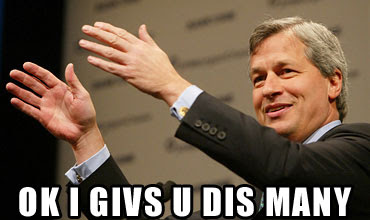