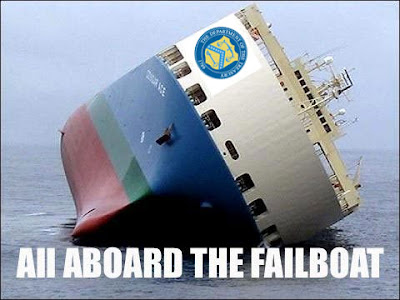 The credit crisis is causing a growing number of delivery failures with Treasury securities.

The latest data from the Federal Reserve Bank of New York showed that cumulative failures hit a record $2.29 trillion as of Oct. 1. The federal settlement period is T+1 (trade date plus one day).
(It's now up to $2.5 trillion http://www.newyorkfed.org/markets/statistics/deal.pdf )
The outstanding U.S. public debt is $10.3 trillion.

"Current [fail] levels are at historic levels," said Rob Toomey, managing director of the Securities Industry and Financial Markets Association's funding and government and agency securities divisions. "There's been significant flight to quality" with the market turmoil, he said.

With the strong demand for Treasury securities, "some of the entities that bought Treasuries are not making them available in the [repurchase] market, which is the traditional way to get them," Mr. Toomey said.

Unlike some past bouts with high failure rates that involved particular bond issues, the current high fails involve all types of maturities, he said.

This month, New York- and Washington-based SIFMA came out with a set of best practices to reduce failed deliveries.

Chronic failures can increase illiquidity problems in the market and expose market participants to losses in the event of counterparty insolvency, according to the New York Fed. "There is a question about there being some impact on liquidity if [delivery failures] last for a long period," Mr. Toomey said.

Many retail investors also own Treasury securities, either directly or indirectly. The Treasury market is also an important fixed-income benchmark, so any liquidity problems can affect all participants.

In extreme cases, chronic fails could cause participants to limit their trading in secondary markets, the New York Fed said.

"Who wants to buy what they're not going to get?" said Susanne Trimbath, a market researcher with STP Advisory Services LLC of Santa Monica, Calif. In a September research paper, she estimated that based on failure rates in 2007 and 2008, the cost to investors from failed deliveries is about $7 billion annually.

The cost arises because sellers don't have access to their money. In addition, the federal government loses $42 million a year in lost revenue, and the states miss out on an additional $270 million in revenue due to excessive claims of tax-exempt income on state-tax-free Treasury securities, Ms. Trimbath said.

She and researchers at the New York Fed said that some delivery failures are intentional.

"There can be circumstances in a low-rate environment where it's cheaper to fail" than deliver, Mr. Toomey said. Such an environment also reduces incentives to act as a lender of securities, he said.

A 2005 study by the New York Fed confirmed that episodes of persistent settlement fails are often related to market participants' lack of incentive to avoid failing.

"We've got to get the [Securities and Exchange Commission], the Fed and SIFMA in there to force" Treasury traders to deliver securities, Ms. Trimbath said.

The Department of the Treasury has a buy-in rule for the cash markets, but the repurchase markets rely on contracts, Mr. Toomey said. Currently there are no penalties for failures, and regulators to date have not required disclosure whether the dealer or the client fails to deliver.

By industry convention, fails are generally allowed to roll over until they are eventually closed out, Ms. Trimbath said.

She said that scrutiny by the SEC and the Fed, and widespread investigations into short-selling practices, are driving the industry to rein in questionable practices with Treasuries.
Mr. Toomey said that one of SIFMA's best-practices suggestions is to require that extra margin be provided by the party that is underwater due to a failed delivery.

SIFMA also said that it is establishing a Treasury fails monitoring committee, with representatives from the Fed and Treasury.

The committee will alert the market "when marketwide mitigation, remediation and the attention of management is warranted" because of a high level of fails, SIFMA said in a statement.
http://www.investmentnews.com/apps/pbcs.dll/article?AID=/20081019/REG/310209975

The U.S. Treasury is now asking the dealers how they can prevent these cronic fails:

The Treasury also asked the primary dealers what can be done to prevent ``fails,'' when Treasury market participants fail to deliver securities.

``What steps can be taken by the private sector to ensure efficient market function to prevent episodes of chronic fails?'' the Treasury asked. ``For example, could amendments to the master repurchase agreement and the establishment of a standard cash trading agreement provide for greater economic incentives that would help clear fails before they became chronic.''
http://www.bloomberg.com/apps/news?pid=newsarchive&sid=aq8WPPUrEhM0
How about not selling something you don't own? Maybe the FED will announce some new alphabet soup with their once proposed SLLR facility! (Security Lender of Last Resort)
http://www.ustreas.gov/offices/domestic-finance/debt-management/securities-lending-facility_04262006.pdf
Posted by Palmoni at 6:58 AM