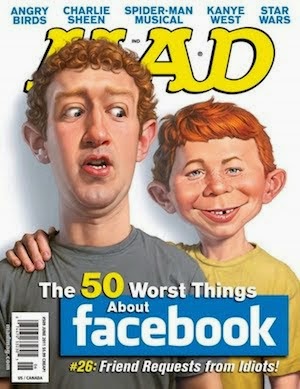 Every year it is the same old story.  And every year, Wall Street attempts the con.  Get the sheep to sell, rinse, then rise, and then repeat.

Let's go back when Facebook was a $15 billion market cap in 2008.  Remember that? When MSFT purchase of 1.6% was "the worst venture capital deal  of all time?"

So take the Mad approach--"What me Worry?" when Wall Street tells you to sell!

This week’s chatter that Microsoft may have approached Facebook to discuss a possible takeover has created quite a buzz. But maybe Microsoft should be inquiring about getting a partial rebate on its $240 million investment instead.

Microsoft’s October purchase of a 1.6 percent Facebook stake implicitly valued the social-networking Web site at $15 billion. Even at the time, some people questioned such an eye-popping valuation. But as the months have passed, the number is looking even more bubbly. And not just to us: Several Web sites this week have questioned the value implied by Microsoft’s Facebook deal. On Friday, PEHub’s Dan Primack suggested it might be “one of the worst venture capital deals of all time.”
Posted by Palmoni at 7:52 AM