Loyal to the end 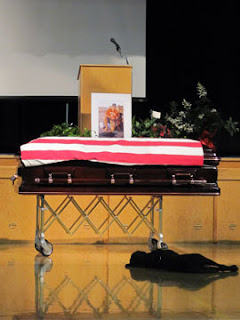 Jon Tumilson, a Navy SEAL, was one of 30 Americans killed in Afghanistan on Aug. 6 when a rocket-propelled grenade took out a U.S. Chinook helicopter. He was mourned at a service in Rockford, Iowa, attended by 1,500 family members, friends--and Hawkeye, Tumilson's dog.

The Labrador retriever was such an important part of Tumilson's life that the friends and family of the San Diego resident called the dog his "son."

When Tumilson's friend Scott Nichols walked to the front of the room to speak, Hawkeye followed, Today.com reports. "As Nichols prepared to memorialize his friend, Hawkeye dutifully laid down near the casket," Scott Stump writes.
Posted by Palmoni at 5:40 PM