Barron's touts the Fuel Cell stocks (They must of read my story 7 hours earlier!)

Tesla: First We Take Manhattan, Then We Take Berlin

Tesla Motors (TSLA) inexorable rise continues today, thanks to an expansion in Europe and some positive comments from Morgan Stanley. But the real beneficiaries have been
fuel-cell makers like FuelCell Energy (FCEL), Plug Power (PLUG) and Ballard Power Systems (BLDP). 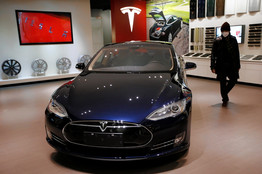 In order to serve a growing customer base in Europe, Tesla will open more than 30 new service centers and stores across the continent, the company announced today at the Geneva Motor Show. Tesla will also continue rapidly expanding its Supercharger network, allowing Model S drivers to travel long distances across Europe for free.
The retail, service, and Supercharger expansions come as Tesla dials up its commitment to Europe, which continues to be a priority market for the company.

Morgan Stanley’s Stephen Byrd and team believe Tesla’s big move in batteries could be bad news for utilities. They explain:

Our analysis suggests utility customers may be positioned to eliminate their use of the power grid. Tesla Motors plans to build a “Gigafactory” for battery production on an unheard-of scale. That news, coupled with ongoing cost/efficiency improvements in distributed generation, prompted our state-by-state analysis of potential implications for the utilities.

A transition to off-grid power would benefit Tesla and SunEdison (SUNE). We expect Tesla’s batteries to be cost competitive with the grid in many states, and think investors generally do not appreciate the potential size of the market.