Icahn reps to get two board seats on Herbalife 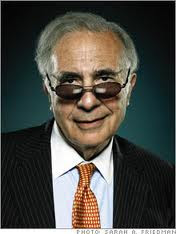 And once again, the FREE MONEY pick, touting HLF and advertised this morning six hours before the opening was FREE MONEY for the taking.

The Press release and the squeeze on Ackman today continues!!

Herbalife (HLF) today announced that it has reached an agreement with Carl C. Icahn, Icahn Enterprises Holdings L.P. and certain related entities (collectively the “Icahn Parties”), which beneficially own, in the aggregate 14,015,151 shares of Herbalife common stock, representing approximately 13.6% of the Company’s outstanding shares. As part of the agreement, Herbalife will increase the size of its Board of Directors from nine to eleven members immediately before the 2013 Annual General Meeting of Shareholders (“the Annual Meeting”). Herbalife’s Board of Directors will nominate two individuals to the Company’s Board of Directors, designated by the Icahn Parties and approved by the Company’s Nominating and Corporate Governance Committee.
Under the terms of the agreement, the Icahn Parties have agreed to, among other things, abide by certain standstill provisions and vote their shares in support of all of the Board’s director nominees. The Icahn Parties have the right to increase the size of their ownership position in Herbalife up to 25% of the outstanding common stock. A copy of the agreement with further detail will be attached to a Current Report on Form 8-K to be filed by Herbalife with the Securities and Exchange Commission.
“We are pleased to have reached this agreement and look forward to working with the Icahn representatives as members of our Board of Directors,” said Michael O. Johnson, chairman and chief executive officer of Herbalife. “We appreciate the Icahn Parties’ shared views on the inherent value of Herbalife’s operations, products and future prospects.”
“Over its long history, Herbalife has proven its ability to increase revenues and returns, and we will work with the Company to build on its results,” said Mr. Icahn. “We conducted considerable research on Herbalife and its business before making our investment in the Company, and have great respect for its Board and management team, and believe in the Company's great potential. We expect our shareholder representatives to provide positive input into Board decisions affecting the future of the Company.”
Posted by Palmoni at 2:44 PM

didn't Bill Ackman sell Target(TGT) when it was in the $40's and swap it for JCP? Didn't he bet big on Borders? Didn't he sell Citigroup in the $20's and buy PG? Didn't he say he loves to eat at Burger King? weird.