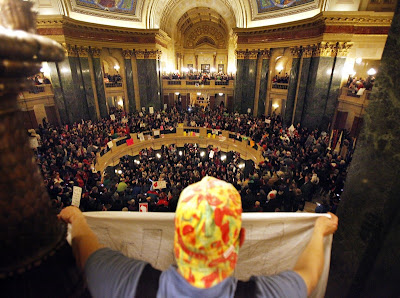 Click on the HD version at the link above to really see what is going on.

And the new Secretary of Agriculture--Ben Brancel--whose farm I worked on during college--called the protest a "holocaust."

A senior Wisconsin agriculture official described the weeks of pro-union protests at the state Capitol as a "holocaust" during a speech on Wednesday, before apologizing hours later.
Ben Brancel, the new secretary of the Wisconsin Department of Agriculture, Trade and Consumer Protection, made his remarks during a speech to the Wisconsin Farm Bureau Federation hours before Republican legislators passed a contentious bill stripping public workers of nearly all their collective bargaining rights.
"They (lawmakers) came to town with a lot of ideas and a lot of concepts they could really work on and then they got stuck in the middle of a holocaust and a horror story that was going on in town," Brancel told the crowd. WKOW-TV first reported about the comments.
He was a douchebag back then, and still is now!
Posted by Palmoni at 1:37 AM