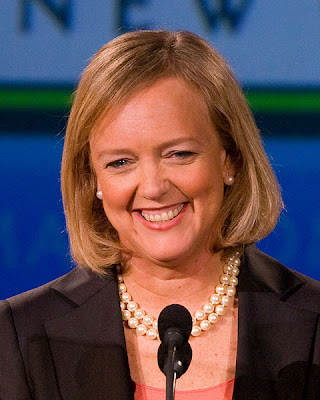 Meg Whitman spent $144 million of her own money running for Governor of California, before losing to Jerry Brown. Look how she looks when she thinks she's going to be Governor.

Before voting for herself for Governor, she hadn't voted in 28 years.

So she left politics to run Hewlett Packard, in September of 2011, after being on Hewlett's board since January of 2011.

When HPQ announced the acquisition of Autonomy, the market reacted by chopping $12 billion of shareholder value instantly from HPQ.

Apparently no one at HPQ understood what that meant.

Today HPQ took a charge of $8.8 billion for the Autonomy acquisition.

So Meg, in 14 months, at the helm of Hewlett Packard, took an $8.8 billion charge on a failed acquisition  and was CEO while HPQ, lost over $30 billion of shareholder money!

And she wanted to run California???? 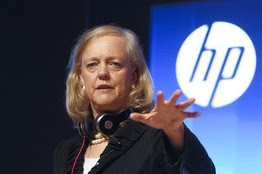 It still looks that the only beat Meg can do for HPQ, is on her headphones, as she blames her predecessors for the mistakes!

(You know what that means? Her next run is for President!)

The only winner on HPQ? 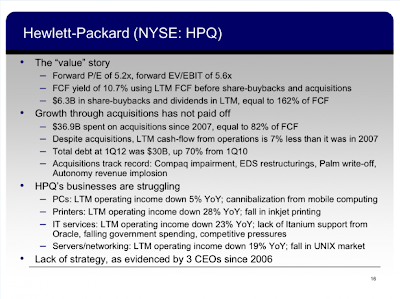 Jim Chanos.
Posted by Palmoni at 9:54 AM

Glad to have you back.

Your friend from North of the border.