Tebow Mic'd up vs Bears 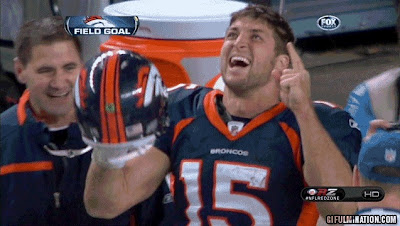 And check out this link--the last 4 minutes of the game.
http://www.nfl.com/videos/nfl-films-sound-efx/09000d5d825100af/Sound-FX-Tim-Tebow-s-comeback

Tebow was singing church hymns in warmups--off key of course.

So remember Hugh Douglas and his errant prediction--- and having to go to church after a Bronco win? Tebow during the presser said "Douglas better get out his Sunday best...and I hope he sings praise and worship too."

Hugh watched the game, where Tebow won with ESPN's with Michael A Smith. Tebow's "praise and worship" song that he was humming before the Bears game is here-- sung by Michael W Smith.

So once again, with Tebow, you have that coincidental connection that drives the critics crazy, and make his followers believe.

But the real secret to Tebow's success is hard work.

The temptation is to look at Tebow’s serene smiles in news conferences, watch him shrug shyly at questions about his abilities, listen to him talk about Jesus and think he is a man who plays football simply to spread the word of the Bible. The image is of a marginally skilled player who believes the Lord will slice holes in the defense or find a way to get a receiver open downfield.
And yet inside the Broncos’ complex, conversations about Tebow go on for half an hour without a mention of God or religion or their most famous player’s spirituality. The talk is instead about a man who is driven, who arrives early in the morning and leaves long after most of his teammates have departed. In college Tebow was famous for declarations of hard work but that seemed more about lifting weights and running sprints. Now that he is in the NFL, his diligence is in improving his throwing and studying opponents. The phrase most often attributed to him is not about God but rather, “Tell me how I can get better.”
Want a reason the Broncos are in first place in the AFC West with what amounts to a two-game lead over the Oakland Raiders? It is Tebow’s obsessive preparation.
The hour doesn’t matter. It could be 9 p.m., maybe 10, but at some point every night the phone of Broncos quarterbacks coach Adam Gase will ring and Tim Tebow will be on the line.
“I’ve been watching film,” Tebow will say. Then a string of questions: What happens if a defensive player moves a certain way? How should he go? And what about the receivers? Are there other options?
Quietly, Tebow has dazzled the Broncos coaches with his deep understanding of complex offenses. When he showed up to the team’s suite for his interview with the staff at last year’s combine, he immediately rattled off the principles of his offense at Florida. But then he launched into Norv Turner’s digit system as well as the Patriots’ offense, which the Broncos were also using. The coaches were stunned.
----------------------------------------------------------------------------------------------------------------------------------------------------------
So if you can criticize his work ethic, criticize him, because he belives in God.
Which makes him blessed. Because Christ said this:
Blessed are you when people insult you, persecute you and falsely say all kinds of evil against you because of me.
Matthew 5:12
So does that mean then, that the critics and haters are are being pawned by Tebow's Awesome God?
Posted by Palmoni at 3:06 AM

I am glad when reading your blog post with updated knowledge! Thanks allot and expect that you will blog post more sites that are connected to this site.

There are various options to find such service providers but finding someone trustworthy with the great reputation and clean track record is a tricky task, for that you need to be a bit of prepared so that you are not duped by the swindle service providers. Considering such points, we have come in the market to assist you with all your requirements and to endow you with the best movers and packers in Ahmedabad nearby your location.

Packers and Movers in Delhi

Packers and Movers in Noida

Packers and Movers in Faridabad

Packers and Movers in Ghaziabad

Packers and Movers in Mumbai

Packers and Movers in Bangalore

Packers and Movers in Pune

Packers and Movers in Kolkata

Packers and Movers in Chennai

This information is very useful. thank you for sharing. and I will also share information about health through the website

Your search has ended if you were looking for website development, software development or a mobile app development company, and also render the digital marketing services along with these. We believe in providing satisfactory results in decent time to win customers' faith and trust to strengthen the bond for the long term. Connect with our experts by dialing +91-9910070501 to learn more.

Don't overlook the need to upgrade your CRM Software. It works as the backbone of your business. If your present software is not capable and if your clients are not satisfied with your customer services, then you must not waste a second and dial +91 9910070501 to connect with the software development company.