Some so called pseudo scholars mock Esther. The name of God isn't even mentioned they say. How can they see the name of God when they can't even discern the hand of God?

Esther, a Jew, married the King of Persia, who did not not know she was Jewish because her cousin, Mordecai, which introduced Esther to the King, told her not to tell him. The King's right hand man was Haman, and the palace servants showed him reverence, but Mordecai would not bow down to him, despite the King's commands. So Haman declared he would wipe out the Jews, (destroy, to slay, and to cause to perish, all Jews, young and old, little children and men) and he plotted to hang Mordecai, and built 75 foot gallows for Mordecai's hanging, but Haman, fell asleep on Esther's bed so the King promptly hanged Haman on the gallows he built for Mordecai.

But Haman had signed a decree to wipe out the Jews, and it couldn't be reversed. So the King decreed the Jews could fight back. (Trivia note-Esther 8:9 is the longest verse in the Bible). Ancient Persia is today's Iran-who still publicly declare their intent to wipe out Israel. 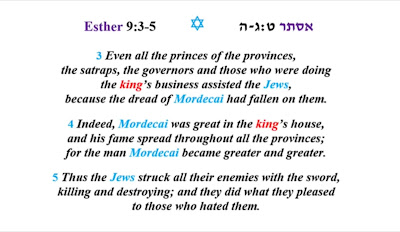 And the Jews killed all their enemies. 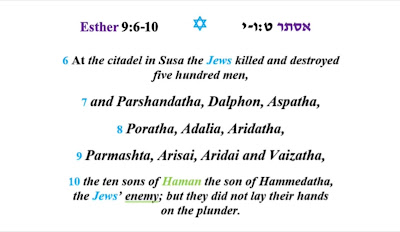 And they killed the 10 sons of Haman. 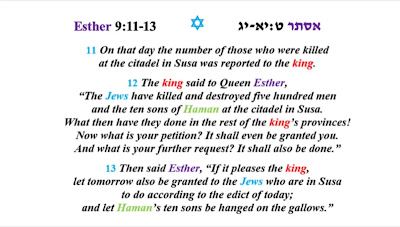 But in Esther 9:13 Esther made a strange request--"Tomorrow...let Haman's ten sons be hanged on the gallows." They were already dead! Jewish sages (Rashi Exodus 13:14) say "There is a tomorrow that is now, and a tomorrow which is later."

Here you can see above the names of the sons of Hamon. And the narrow base means the sons had no handhold to rise from their downfall. 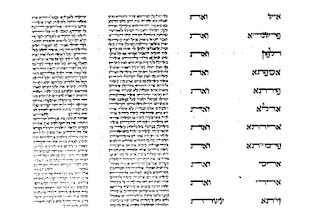 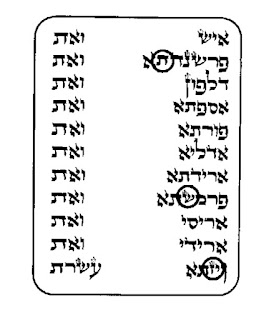 The sons of Hamon has three letters written smaller, and one written larger. Nachmanides said in his Genesis introduction commentary:

"Everything written in the Torah, explicity or implicity, hinted in words, in numerical values, in the shape of the letters (whether written in regular or altered form), or in the crownlets of the letter." 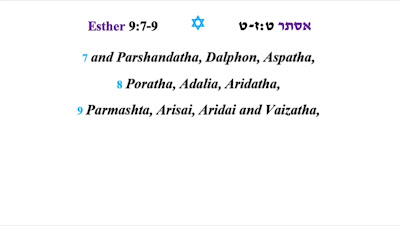 The first letter in the Hebrew alphabet is Alef, and has a value of 1,  and the last letter is the Tau that has the value of 400. The first and the last. The sixth letter in the Hebrew alphabet is the Vav, and it has a value of 6.  The word, vav, aleph, tau, means "and" and was first used in Genesis 1:1 when God created the heavens AND the earth. Who connects the heaven and earth? Jesus the Messiah, who declares the end from the beginning. The letter Vav means nail, connect, or upright man. In Esther 9:7-9 above, we have the names of the ten sons of Haman, that were killed, and then we have them, below as written in Hebrew, the "and" being the first word on the right, and then the names of the son of Haman that were killed.  And means replication, and the way it was written means that more replication was too come.  Here it is easier to see. "There is a tomorrow that is now, and a tomorrow which is later." 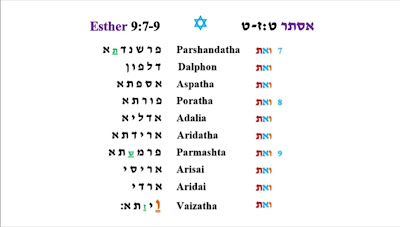 Notice in green highlighted we have 3 Hebrew letters that are SMALLER than what they should be. That is so you take notice of them. There is also a LARGER highlighted "Vav." 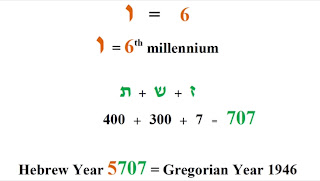 Here are the Hebrew letters and their values.

The large Vav, in the tenth name, Vaizathai is capitalized and that value is 6. In Hebrew, you know what millennium you are in; therefore you are concerned with the year. You can see the 6th millennium below, and the 707, from the smaller tau, shin and tat gives you a numerical value of 707. 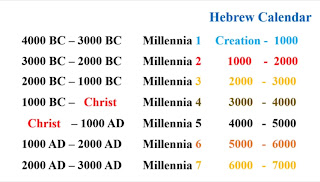 Those numbers correspond, in the story in Esther to the date below. 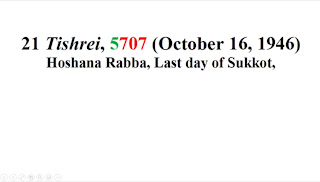 The Holocaust, was another attempt by Satan to wipe out the Jewish people. 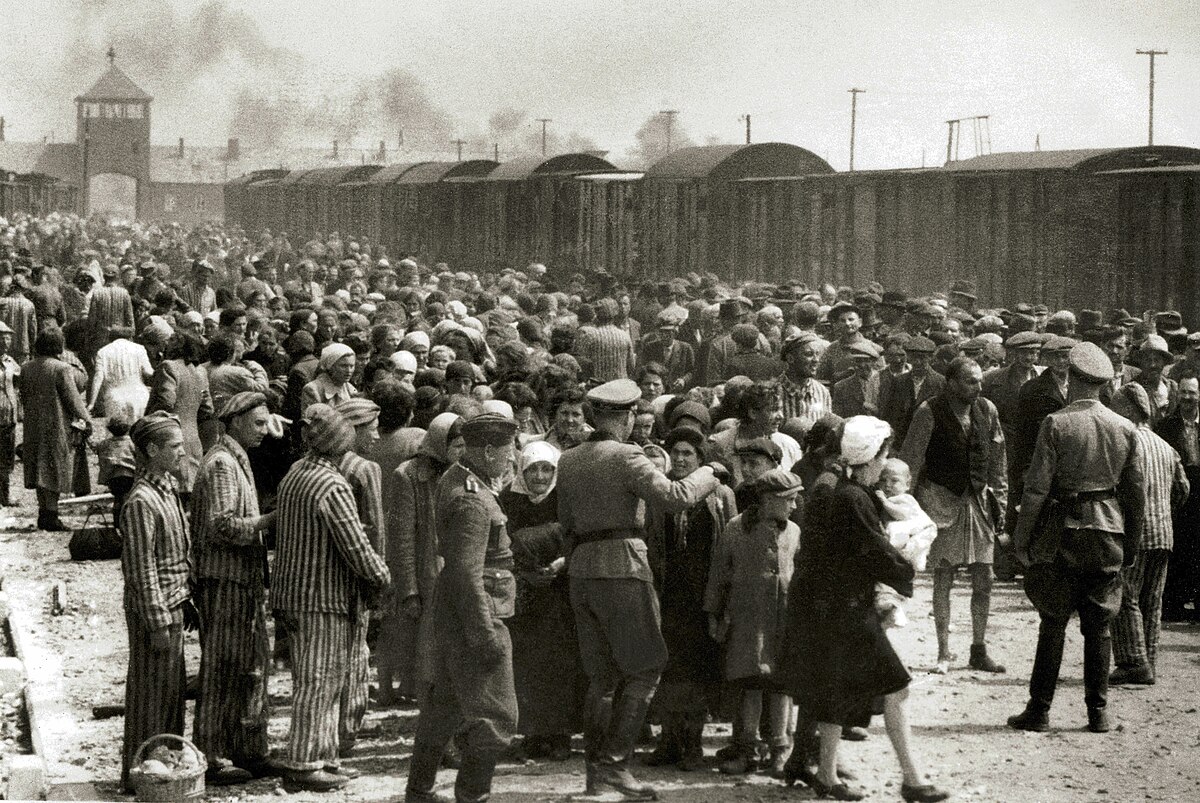 After World War II, there were 12 Nazi leaders that were tried at Nuremberg for war crimes. One of them that was convicted, was Martin Bormann, who was sentenced in absentia. Now there was 11.
"let Haman's ten sons be hanged"

Herman Goring was next in line to Hitler, and started the Gestapo. The last year of his life, he was plundering property and artwork stolen from the Jews and Germans. He was charged with killing of 5.7 million Jews. He, like Hitler, committed suicide. Goring ingested two hours before he was supposed to be hanged. Now there was 10.
"let Haman's ten sons be hanged" 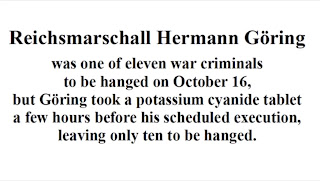 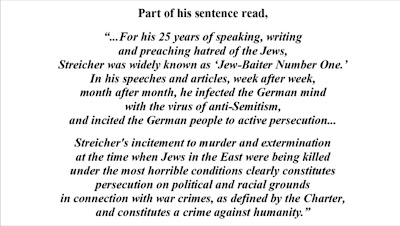 The trial was conducted by a military tribunal, therefore the sentence should have been death by a firing squad or electric chair. But the court said otherwise, and the court ordered death by hanging.
Exactly as Esther had requested. For 10 to be hanged.
"let Haman's ten sons be hanged" 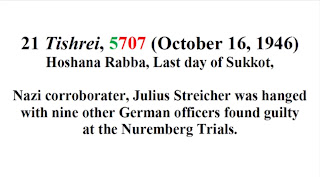 "Streicher appeared at the chamber...his scream of Heil Hitler sent a shiver down the back...as he mounted to the platform he called, "And now it goes to God."

He glared at allied officers and eight Allied correspondents representing the world's press who were lined up at the gallows.  With burning hatred in his eyes, Streicher looked at the witnesses and shouted "Purim Fest 1946!" 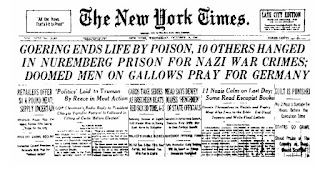 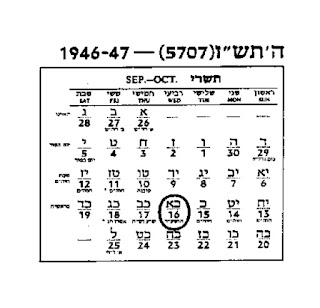 The date of the execution (October 16, 1946) fell on the Jewish festival of
"Hoshana Raba" (21 Tishrei) which is
the day God's verdicts are sealed.

And the Hebrew word for tree is "eytz" which also means woods. The hangman at Nuremburg was American army officer named

Think about your salvation and your preparation for eternity. Are you out of the woods? Yet?

Here is the 8th and 9th Chapter of Esther. Using eqi-distant spacing, we see these codes.

Thanks for posting such an blog it is really very informative. And useful for the freshers Keep posting the updates. SEO Company in Delhi

Really impressive post. I read it whole and going to share it with my social circles. I enjoyed your article and planning to rewrite it on my own blog. Manufacturer & Dealers in Energy Saving Sensor